Bio-fiction: Which Lies Do We Tell? 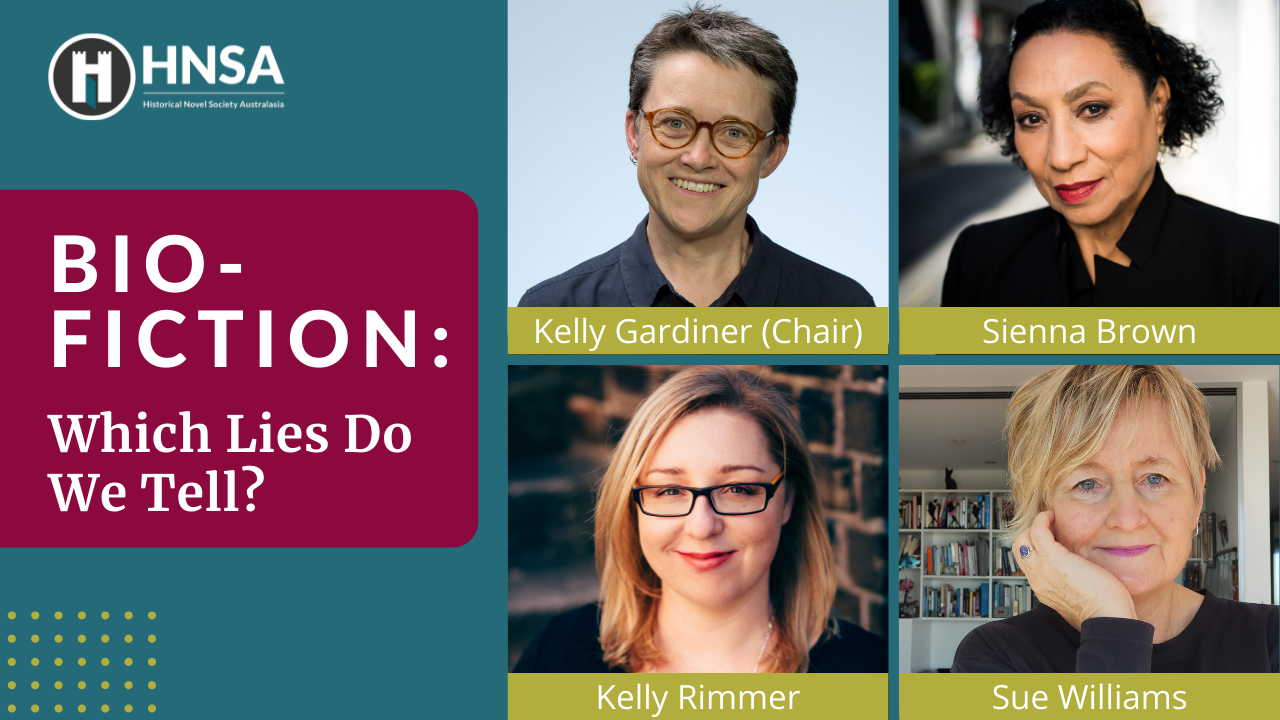 Biographies are full of facts as well as fictionalised versions of the truth. Which of these take precedence when telling the story of someone else’s life? Kelly Gardiner chats with Sienna Brown, Kelly Rimmer and Sue Williams about how they navigated between the two, and what choices they made to write compelling biographical fiction.

Kelly Gardiner writes historical fiction for all ages. Her latest series is The Firewatcher Chronicles. Her other books include Goddess, based on the life of Mademoiselle de Maupin; 1917: Australia’s Great War, shortlisted for the NSW Premier’s Young People’s History Prize and Asher Award; the Swashbuckler pirate trilogy; and a picture book, Billabong Bill’s Bushfire Christmas. Her young adult novels Act of Faith and The Sultan’s Eyes, were both shortlisted for the NSW Premier’s Literary Awards, while Act of Faith was shortlisted for the ASA’s Barbara Jefferis Award. A former journalist, Kelly teaches creative writing at La Trobe University. For further information:

Sienna Brown was born in Kingston, Jamaica, and grew up in Canada. But it wasn’t until a move to Sydney that she came across William Buchanan’s story and was struck with a sense of fate – this story of a lost man far from home resonated with her own feelings of displacement. A lifelong storyteller and daughter of Jamaican parents, Sienna was captivated by William’s story and the way it intersected with her own cultural background. She’s been a professional dancer, film editor and documentary director, and worked at Sydney Living Museums, where she first came across William’s story. In 2020, Master Of My Fate won the MUD Literary Award for best Australian debut novel and was also shortlisted for the 2020 ARA Historical Novel Prize. She is currently working on her second historical fiction novel: Heat In The Afternoon. She’s just been commissioned by ABC Radio National to co-produce with Dr Ben Etherington: Where do you come From? Caribbean Convicts In Australia, a documentary podcast for the History Listen series. Research for this project has been funded by the School of Humanities and Communication Arts, Western Sydney University. For further information:

Kelly Rimmer is the New York Times, Wall Street Journal, USA Today and worldwide bestselling author of contemporary and historical fiction, including The Secret Daughter and The Things We Cannot Say. Kelly lives in rural Australia with her family and a whole menagerie of badly behaved animals. Her novels have been translated into more than 20 languages. For further information:

Sue Williams is a bestselling author and award-winning journalist and travel writer, working in newspapers, magazines and TV in Australia, the UK and New Zealand. Born in England, but settling in Australia in 1989, she’s also lectures on writing at Boston University’s Sydney campus. After 25 non-fiction books, from biography and true crime to travel, her first historical novel, Elizabeth & Elizabeth, about a friendship between Governor’s wife Elizabeth Macquarie and wool pioneer Elizabeth Macarthur in early colonial Australia, was published in 2021 to much acclaim. She’s now working on another novel based in early 1800s Australia. For more information: