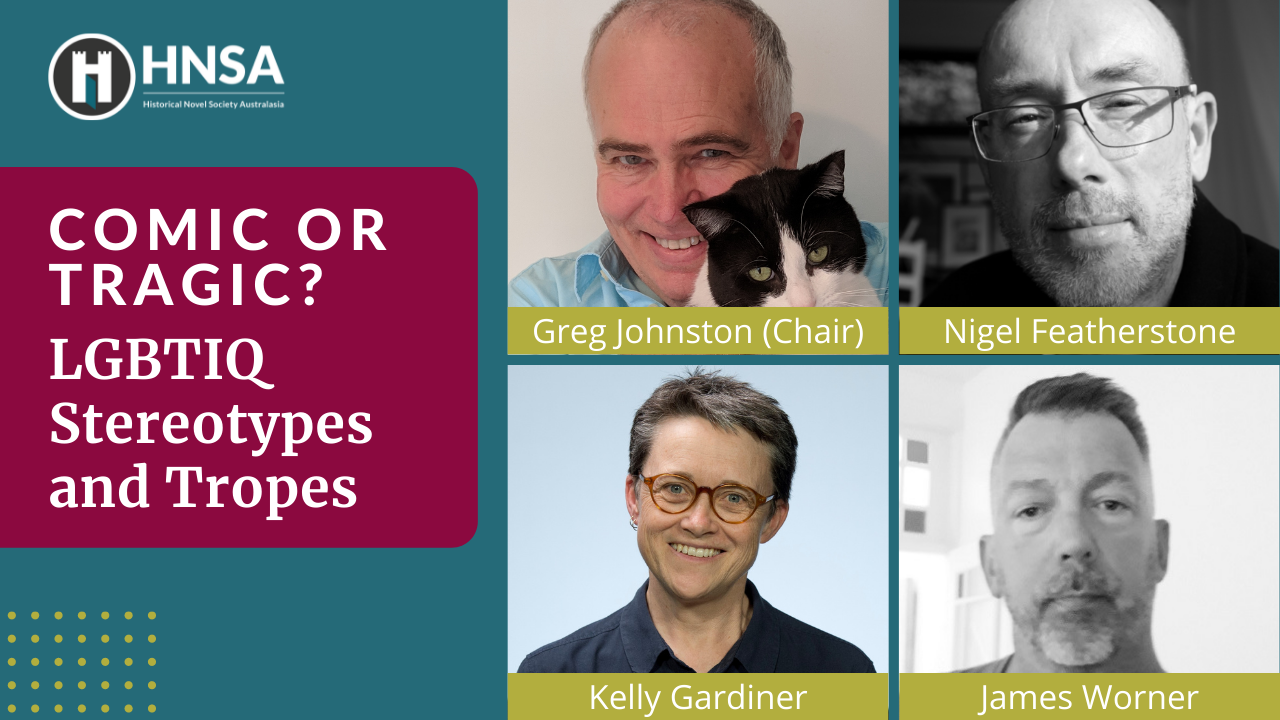 When LGBTIQ characters are represented in historical fiction, the men are often a little light on their feet, the women a little man-ish, or are either a stylish couturier or a muscle bound mechanic. Why are such characters often sidelined into sub-plots or endure tragic fates? Greg Johnston will talk with Nigel Featherstone, Kelly Gardiner and James Worner from where these stereotypes and tropes came, to what ends they’ve been deployed, and what new approaches are needed to break these moulds.

G.S. Johnston is the author of three historical novels – Sweet Bitter Cane (2019), The Cast of a Hand (2015), and The Skin of Water (2012), and a fourth novel set in contemporary Hong Kong, Consumption (2011). The novels are noted for their complex characters and well-researched settings. After completing a degree in pharmacy, a year in Italy re-ignited his passion for writing and he completed a Bachelor of Arts degree in English Literature. Feeling the need for a broader canvas, he started writing short stories and novels. Originally from Hobart, Tasmania, Johnston currently lives in Canberra, Australia. Greg is the Treasurer of the HNSAustralasia.  For further information:

Nigel Featherstone is an Australian writer who has been published widely. His war novel, BODIES OF MEN, was published by Hachette Australia in 2019. It was longlisted for the 2020 ARA Historical Novel Prize, shortlisted for the 2020 ACT Book of the Year, shortlisted in the 2019 Queensland Literary Awards, and received a 2019 Canberra Critics Circle Award. A lifelong queer, Nigel lives on unceded Ngunnawal / Gandangara lands, otherwise known as the Southern Tablelands of New South Wales. He is represented by Gaby Naher, Left Bank Literary, Sydney. For further information:

Kelly Gardiner writes historical fiction for all ages. Her latest series is The Firewatcher Chronicles. Her other books include Goddess, based on the life of Mademoiselle de Maupin; 1917: Australia’s Great War, shortlisted for the NSW Premier’s Young People’s History Prize and Asher Award; the Swashbuckler pirate trilogy; and a picture book, Billabong Bill’s Bushfire Christmas. Her young adult novels Act of Faith and The Sultan’s Eyes, were both shortlisted for the NSW Premier’s Literary Awards, while Act of Faith was shortlisted for the ASA’s Barbara Jefferis Award. A former journalist, Kelly teaches creative writing at La Trobe University. For further information:

James Worner is a longtime member of Sydney’s Pride History Group, a volunteer community group dedicated to researching, writing about and recording memories of underwritten LGBTIQ histories. Research for a historical novel, set on the New South Wales mid-north coast during World War I, resulted in James pursuing and recently completing a PhD in queer Australian masculinities. His doctoral submission included a number of short stories on masculinities of German internment. His most recent academic publication is a chapter on speculative autobiography, based on the 1934 ‘novel of contemporary life’ written by former internment camp guard, Edmond ‘Eddie’ Samuels. For further information: