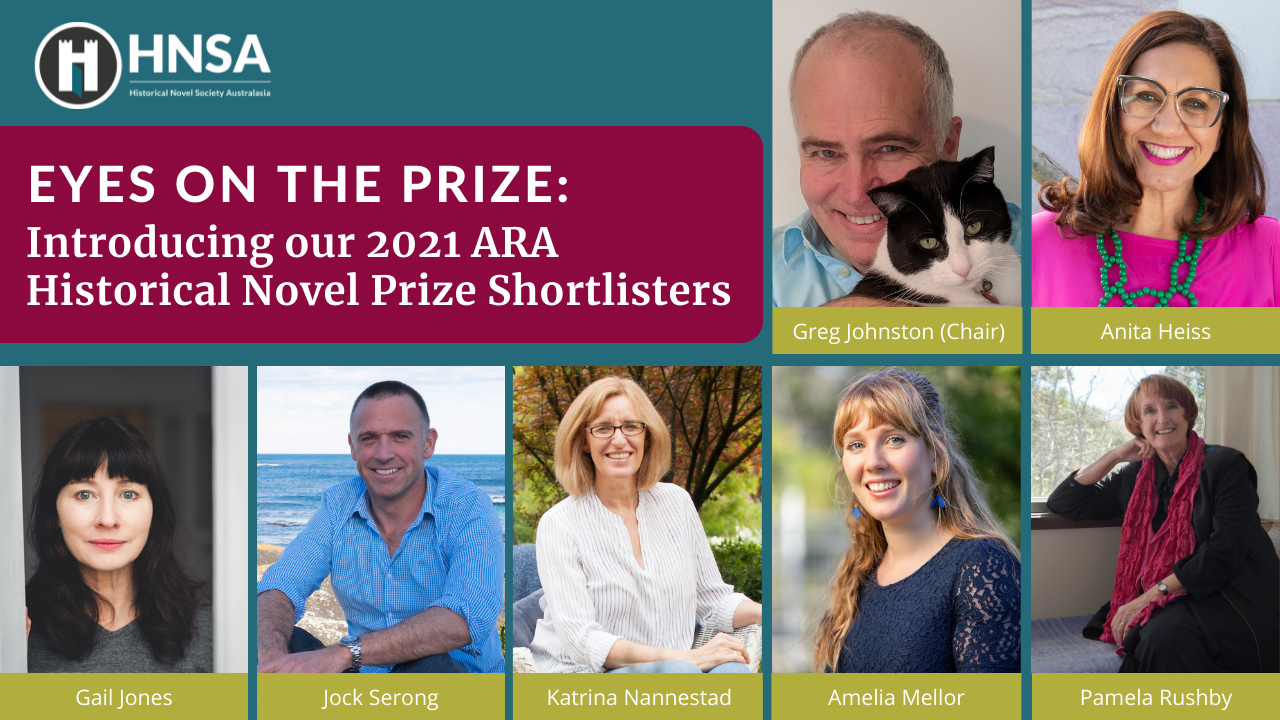 In this round table discussion, our Chair, Greg Johnston, will chat to shortlisted authors in our Adult and CYA categories for the $100,000 2021 ARA Historical Novel Prize: Anita Heiss, Gail Jones, Jock Serong, Katrina Nannestad, Amelia Mellor and Pamela Rushby.

About the ARA Historical Novel Prize

Dr Anita Heiss is an award-winning author of non-fiction, historical fiction, commercial women’s fiction, children’s novels and blogs. She is a proud member of the Wiradjuri Nation of central New South Wales, an Ambassador for the Indigenous Literacy Foundation, the GO Foundation and Worawa Aboriginal College. Anita is a board member of University of Queensland Press and Circa Contemporary Circus, and is a Professor of Communications at the University of Queensland. As an artist in residence at La Boite Theatre in 2020, Anita began adapting her novel Tiddas (S&S, 2014) for the stage. Her novel Barbed Wire and Cherry Blossoms (S&S, 2016) set in Cowra during World War II, was the 2020 University of Canberra Book of the Year. Anita enjoys eating chocolate, running and being a ‘creative disruptor’. For further information:

Gail Jones is one of Australia’s most celebrated writers. She is the author of two short story collections and eight novels, and her work has been translated into several languages. She has received numerous literary awards, including the Prime Minister’s Literary Award, the Age Book of the Year, the South Australian Premier’s Award, the ALS Gold Medal and the Kibble Award, and has been shortlisted for the Miles Franklin Literary Award, the International Dublin Literary Award and the Prix Femina Étranger. Originally from Western Australia, she now lives in Sydney.

Jock Serong’s novels have received the Ned Kelly Award for First Fiction, the Colin Roderick Award and the inaugural Staunch Prize (UK). He lives with his family on Victoria’s far west coast. For further information, visit:

The Grandest Bookshop in the World has won the Indie Bookseller’s Children’s Award, the Australian Book Industry Award for books for children aged 7 to 12 and the Patricia Wrightson Prize for Children’s Literature in the NSW Premier’s Literary Awards. It was also a CBCA Notable Book and shortlisted for the Readings Prize. When she isn’t writing, Amelia enjoys hiking, gardening and drawing. Amelia is an English teacher in regional Victoria. For further information:

Katrina Nannestad is an award-winning Australian author. Her books include We Are Wolves, The Girl Who Brought Mischief, the Travelling Bookshop series, the Girl, the Dog and the Writer series, the Olive of Groves series, the Red Dirt Diaries series, the Lottie Perkins series, and the forthcoming novel Rabbit, Soldier, Angel, Thief.  We Are Wolves has been shortlisted in the 2021 CBCA Awards, the 2021 Book Links Awards, and the 2021 Queensland Literary Awards, as well as being longlisted in the 2021 ABIA Awards and winning best designed children’s fiction book at the 2021 ABDA Awards. For further information:

Pamela Rushby is the author of over 200 books for children and young adults, as well as children’s TV scripts, documentaries, short stories and freelance journalism. Pam has been an advertising copywriter, pre-school teacher, and producer of educational television, audio and multimedia. She has won several awards, including the NSW Premier’s Ethel Turner Prize, six CBCA Notable Books – and a bag of gold coins at a film festival in Iran! Pam believes the strangest, most riveting, heart-breaking, laugh-out-loud stories aren’t fiction. They’re real. They come from history. And she loves tripping over unusual incidents from history – and then writing about them. For further information, visit Pamela’s website.

G.S. Johnston is the author of three historical novels – Sweet Bitter Cane (2019), The Cast of a Hand (2015), and The Skin of Water (2012), and a fourth novel set in contemporary Hong Kong, Consumption (2011). The novels are noted for their complex characters and well-researched settings. After completing a degree in pharmacy, a year in Italy re-ignited his passion for writing and he completed a Bachelor of Arts degree in English Literature. Feeling the need for a broader canvas, he started writing short stories and novels. Originally from Hobart, Tasmania, Johnston currently lives in Canberra, Australia. Greg is the Treasurer of the HNSAustralasia. For further information, visit: