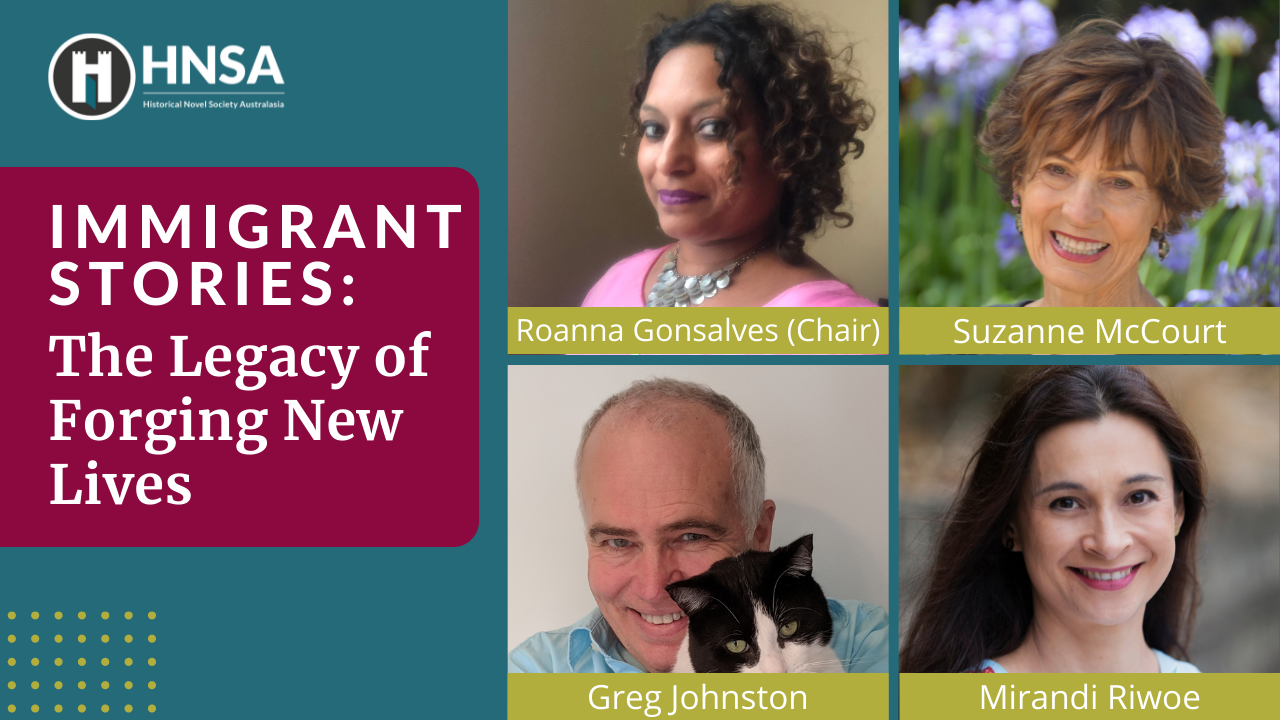 Leaving one’s country of birth is a momentous and life changing decision. These challenging odysseys and new beginnings are of great interest to writers and readers. Join Roanna Gonsalves as she chats with Andrew Pippos, Mirandi Riwoe and Suzanne McCourt about their inspiration and reasons for writing novels examining the clash of cultures in an adopted homeland.

Roanna Gonsalves is the award-winning author of the acclaimed collection of short fiction The Permanent Resident (UWAP) published in India as Sunita De Souza Goes To Sydney (Speaking Tiger). Her writing has been compared to the work of Alice Munro and Jhumpa Lahiri. Her four-part radio series On the tip of a billion tongues, commissioned and broadcast by ABC RN’s Earshot program, is an acerbic portrayal of contemporary India through its multilingual writers. She works as a lecturer in Creative Writing at UNSW, Sydney. For further information:

G.S. Johnston is the author of three historical novels – Sweet Bitter Cane (2019), The Cast of a Hand (2015), and The Skin of Water (2012), and a fourth novel set in contemporary Hong Kong, Consumption (2011). The novels are noted for their complex characters and well-researched settings. After completing a degree in pharmacy, a year in Italy re-ignited his passion for writing and he completed a Bachelor of Arts degree in English Literature. Feeling the need for a broader canvas, he started writing short stories and novels. Originally from Hobart, Tasmania, Johnston currently lives in Canberra, Australia. Greg is the Treasurer of the HNSAustralasia.  For further information:

Suzanne McCourt grew up in a fishing village on the South Australian coast, the setting for her debut novel ‘The Lost Child’, which was longlisted for the 2015 Miles Franklin Award. Her novella, ‘The Last Taboo: A Love Story’, shared first prize in the 2016 Griffith Review Novella Competition. Suzanne’s new novel, ‘The Tulip Tree’, is set in Poland and Russia during the tumultuous wars of the twentieth century. It was published by Text Publishing in June 2021. She has also published a series of gift books on the wise and wonderful ways of old dogs. Suzanne lives in Melbourne, Australia. For further information:

Mirandi Riwoe’s Stone Sky Gold Mountain won the inaugural ARA Historical Novel Prize and the Queensland Literary Award and was shortlisted for the Stella Prize and longlisted for the Miles Franklin Award. Her novella The Fish Girl won Seizure’s Viva la Novella and was shortlisted for the Stella Prize. Her work has appeared in Best Australian Stories, Meanjin, Griffith Review and Best Summer Stories. Mirandi has a PhD in Creative Writing and Literary Studies (QUT). For further information: