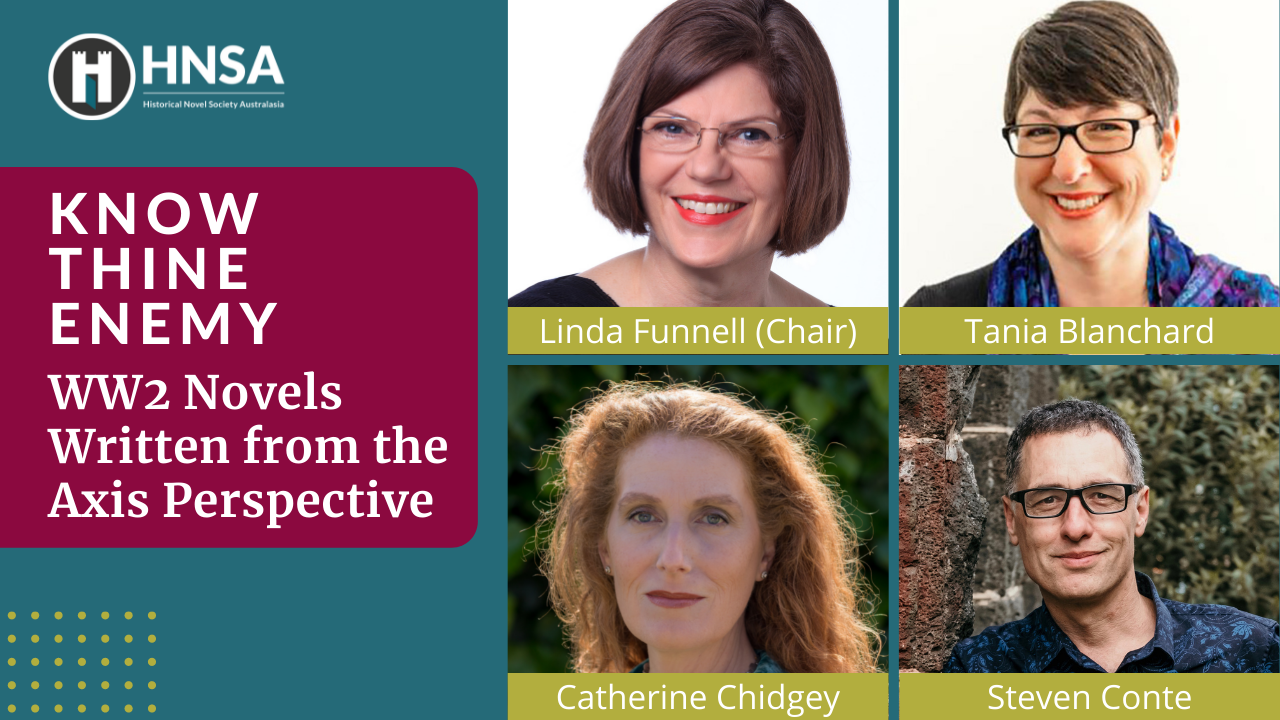 Novelists have long drawn inspiration from the history of the western Allied forces in WW2. In recent times, more authors are featuring stories written from the German perspective. Linda Funnell discusses with Steven Conte, Tania Blanchard and Catherine Chidgey the challenges they faced in overcoming the taboos of centering their novels around German or Nazi protagonists, and how they approached researching non English sources.

Linda Funnell is co-editor of the Newtown Review of Books, a free online book review founded with Jean Bedford in March 2012. For ten years she was a publisher with HarperCollins, and prior to that Random House. Currently she is a freelance editor and publishing consultant. The authors she has worked with include Colleen McCullough, Geraldine Brooks, Diane Armstrong, Louis Nowra, Karen Brooks and Steven Carroll. Linda has taught courses in publishing, editing and writing for UTS, the ASA and Writing NSW. For further information:

Tania comes from a family with rich cultural heritage with a German mother and Italian father who both immigrated to Australia as children in the 1950s. Besides writing and reading, her other great passion is history. Following attendance at Fiona McIntosh’s Commercial Fiction Masterclass in 2015, she completed her first novel, ‘The Girl from Munich’ published by Simon and Schuster in 2017. This was followed by ‘Suitcase of Dreams’ in 2018 and ‘Letters from Berlin’ in 2020. Her fourth book, ‘Echoes of War,’ will be released in September 2021. All her novels are inspired by family stories. Tania lives in Sydney with her husband and three children. For further information:

Catherine Chidgey is a novelist and short story writer whose first novel, In a Fishbone Church, was a critically acclaimed multi-award winner, and a New Zealand bestseller. Among numerous awards, Chidgey received a Buddle Findlay Sargeson Fellowship in 1998, and is a member of the Sargeson Trust. She was awarded the 2001 Katherine Mansfield Menton Fellowship, the inaugural Glenn Schaeffer Prize in Modern Letters in 2002, and in 2005 she received the Robert Burns Fellowship. In 2016 Chidgey published her fourth novel, The Wish Child, which was awarded the Acorn Foundation Fiction Prize at the 2017 Ockham Awards. In 2017, The Beat of the Pendulum was published by Victoria University Press. For further information:

Steven Conte is the author of two historical novels, The Zookeeper’s War (2007) and The Tolstoy Estate (2020). In 2008 The Zookeeper’s War won the inaugural Prime Minister’s Award for fiction and went on to be published in the UK, Ireland and Spain. In 2021 The Tolstoy Estate was shortlisted for the Walter Scott Prize for Historical Fiction and will soon be released in the Netherlands, Italy and Germany. Steven lives in the town of Koroit in southwest Victoria. Currently he divides his time between writing, parenting a child with non-verbal autism and working as a pathology courier. For further information: