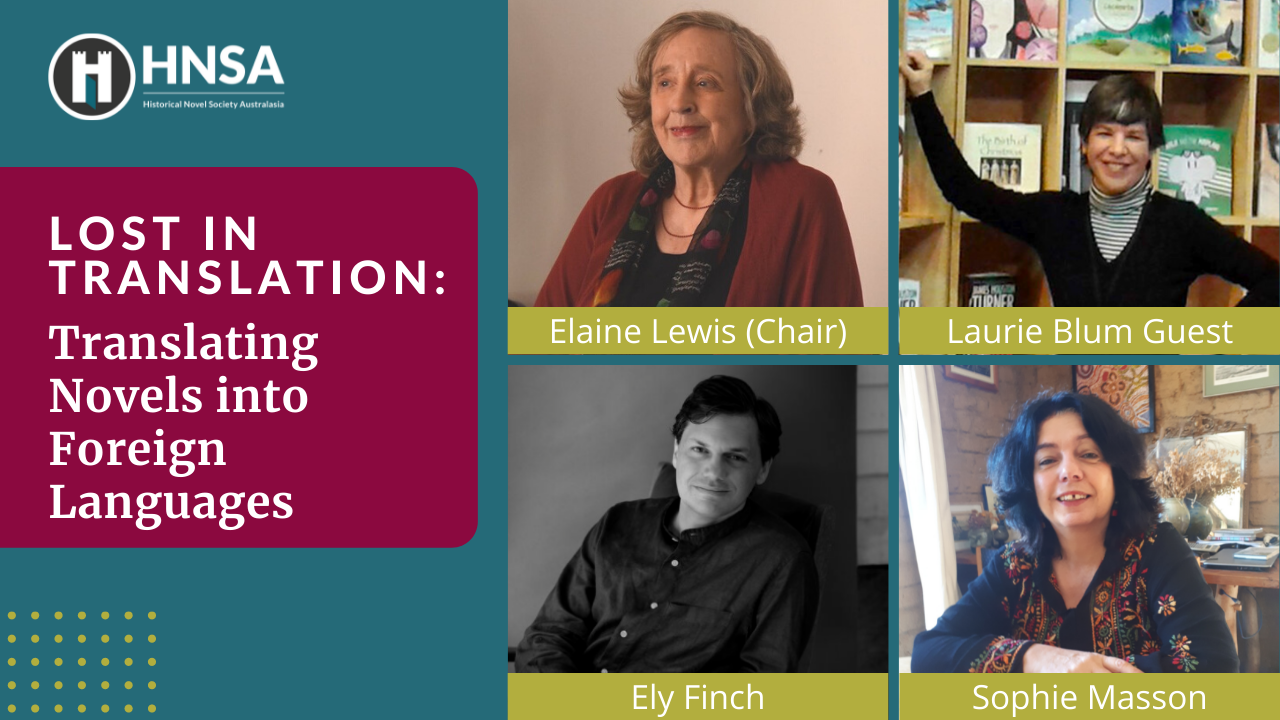 Sophie Masson’s publishing house translated Jules Verne’s historical novel, Mikhail Strogoff, into English. Ely Finch translated Wong Shee Ping’s, The Poison of Polygamy, the first Chinese-language novel to be published in Australia at the turn of the C20th. Agent, Laurie Blum Guest, specialises in negotiating foreign and translation rights. Join Elaine Lewis, translator and holder of the Ordre des Palmes Académiques, in discovering what might be lost and found in translation, and what hidden histories can be restored when translating a novel from one language into another.

Formerly a music educator and writer, Elaine Lewis created the Australian Bookshop in Paris in 1996. There she met poet Jacques Rancourt and began translating for the Franco-anglais Poetry Festival and other poets. Her book Left Bank Waltz was published by Random House Australia in 2006. She is currently co-editor and book review editor of The French Australian Review, the journal of the Institute for the Study of French Australian Relations; book reviewer for Loudmouth E-zine (The Music Trust) and is a committee member of AALITRA (Australian Association for Literary Translation). She has translated poetry from Guadeloupe, Haiti, Switzerland, Canada, La Réunion, Belgium and France, published in La Traductière, Etchings (Ilura Press) and Mascara. She recently translated poetry for a UN anthology. For further information:

Trained as a historian, Laurie worked in N.Y. publishing with Simon & Schuster and MacMillan as well as a major British house before moving to France where for many years published and distributed English language books in France. Having created and launched Re-Naissance whose first project was the creation of a book imprint for a major literary IP along with Marvel Comics, Laurie overseas a 360 degree agency both in Europe as well as the U.S. which encompasses both translation, co-edition, film and television representation as well as distribution, and marketing. Laurie has been a frequent commentator on CNN television. She has been a speaker with the French publisher’s association (BIEF), has received support from the American Embassy in Paris, as well as has been featured and profiled in numerous publications including Le Figaro Littéraire. She is the founder of the Re-Naissance Agency. For more information:
For further information:

Ely is a translator and consultant linguist who specialises in historical texts written in Literary (Classical) Chinese, Cantonese, and other southern Chinese languages. His main focus to date has been texts that pertain to the nineteenth- and early-twentieth-century Chinese diaspora in Australia, with respect to which he has undertaken work for historians, archaeologists, universities, museums, family-history researchers, historical societies, doctoral students and others. Being a speaker of English, Mandarin and Cantonese, with some knowledge of Teochew and the See Yip language, and a broad interest in pre-twentieth-century writing of virtually all genres and time periods, as well as in the history of China and the Chinese diaspora, Ely is also happy to consider commissions that relate to Hong Kong, Canada, New Zealand, the U.S.A. and southern and/or pre-modern China. Ely’s largest translation is Australia’s and possibly the West’s first Chinese-language novel, Wong Shee Ping’s The Poison of Polygamy: A Social Novel. For further information:

Born in Indonesia of French parents Sophie Masson AM is the award-winning author of over 70 books, for children, young adults and adults, many of which are in the historical novel genre. These include the bestselling award-winner The Hunt for Ned Kelly (Scholastic Australia, children’s) and the genre-bending Forest of Dreams(Penguin/Random House, adult). Forthcoming in 2022 is Sydney under Attack(Scholastic Australia, children’s) Sophie is also a founding partner and publishing director of award-winning small publisher, Christmas Press, a children’s/YA specialist, which has published historical novels for children, by established and emerging authors, under its Eagle Books imprint. For more information: