The Aftermath: Tales in the Wake of WW2 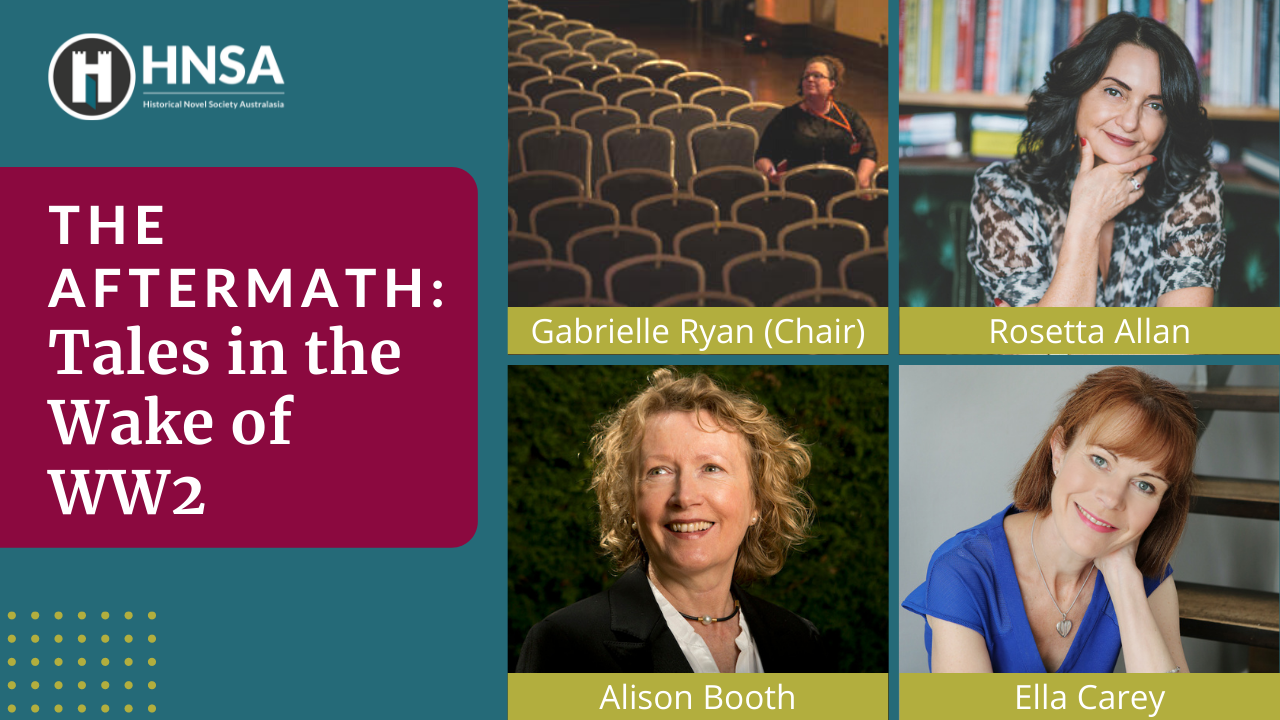 1945 heralded the end of a war that devastated the entire world. Yet peace did not bring union but instead traumatic diasporas and a splintering of East and West. Gabrielle Ryan discusses with Ella Carey, Alison Booth and Rosetta Allan traces of ordeal, undercurrents of Cold War suspicion, and the chances for renewal faced by their characters in the post war period.

Gabrielle is a white writer and arts manager based in Melbourne. She has a PhD in Creative Writing, looking at the Gothic in historical fiction by Australian women writers, and is currently completing the novel that was the creative artefact of that PhD. She works as Events Manager at Melbourne’s Wheeler Centre for Books, Writing and Ideas. For further information:

Rosetta Allan’s novel, Purgatory, was published by Penguin and was selected by Apple Books as one of 2014’s best reads. Rosetta has received the Kathleen Grattan Poetry Award, the Metonymy Best Poem Award, a South Pacific Pictures internship, a Sir James Wallace MCW Scholarship, a Michael King Writers Centre Writers Residency, and was the 2019 University of Waikato & Creative NZ Writer in Residence. In 2016, she was the St Petersburg Art Resident in Russia, where she researched her second novel The Unreliable People. Her latest novel, Crazy Love, will be released August 2021. For further information:

Alison Booth has published six novels, the most recent being The Painting (2021). Her fiction has been translated into French and her short stories have appeared in international publications such as Antipodes. Her fiction awards include a Varuna Longlines Fellowship from the Eleanor Dark Foundation and the Highly Commended Award in the 2011 ACT Book of the Year Award. Alison is also Emeritus Professor at the Australian National University, a Fellow of the Academy of Social Sciences in Australia, a Fellow of the Econometric Society, and recipient of the Distinguished Fellow Award from the Economic Society of Australia. For further information:

Ella Carey is the USA Today and Amazon charts bestselling author of eight novels of historical fiction, published in the USA with Lake Union Publishing and in the UK with Hachette imprint, Bookouture. Ella’s novels have reached over one million readers and have been translated into fourteen languages. Ella has recently signed a six book deal in Germany and a nine book deal in Denmark. Ella’s latest novels are A New York Secret, and The Lost Girl of Berlin, both published with Bookouture in 2021. The Girl from Paris will publish in January, 2022. Ella has a music degree in classical piano, and an arts degree majoring in English and history and post graduate qualifications in teaching. Her novels have been shortlisted for ARRA awards. Ella also works closely with the Australian Society of Authors mentoring aspiring writers and helping them reach their writing goals. For further information: