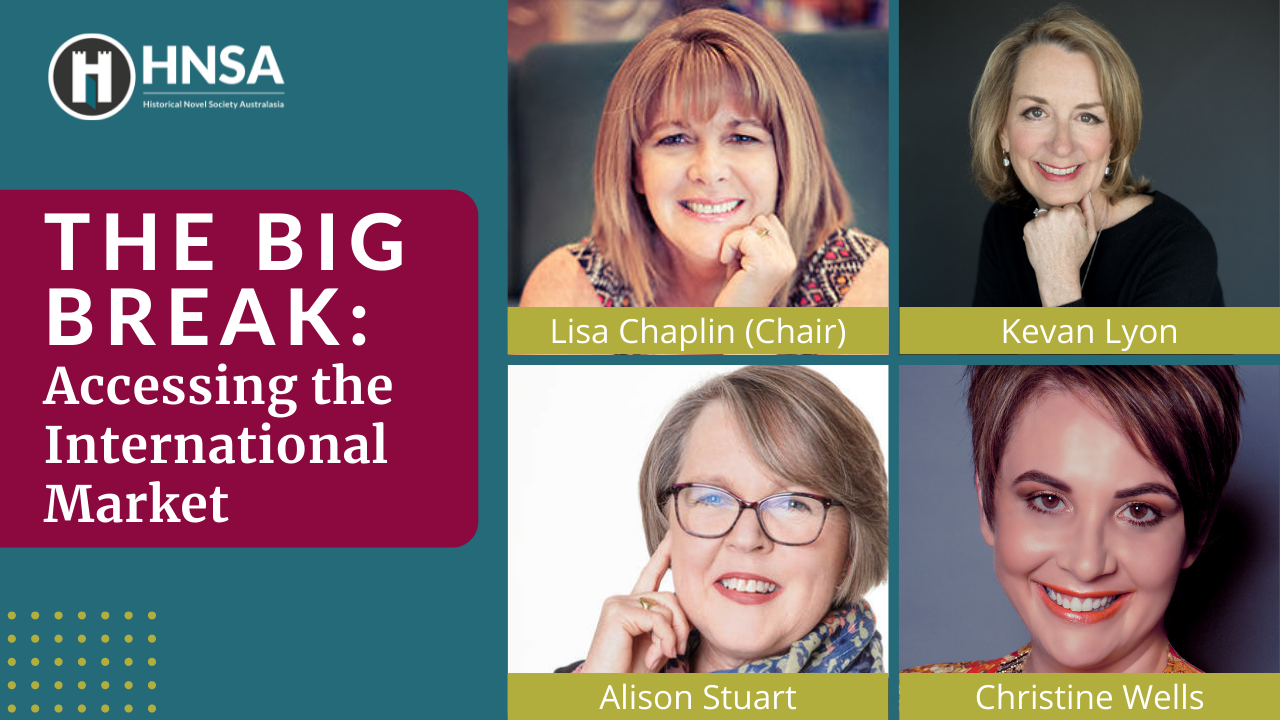 Many ANZ authors have attracted a readership in their own territories but an overseas audience remains elusive. Led in discussion by Lisa Chaplin, Kevan Lyon, owner of Marsal Lyon Literary Agency, provides insights into what an American agent is looking for in a manuscript, and what it takes to get the ‘big break’. Christine Wells and Alison (AM) Stuart share their experiences in becoming one of Kevan’s ‘Lyonesses’ and achieving international success.

A born and bred Sydneysider with Indigenous heritage, Lisa Chaplin spent four years in beautiful Zurich, Switzerland, gathering ideas for novels around Europe before returning to her native soil. Writing under the pseudonym, Melissa James, she tackles stories about the Stolen Generation, PTSD, and families with challenges. Her latest Melissa James’ novel is Beneath The Skin, a women’s fiction crime novel, with Aboriginal major and minor characters is being released in the US by MIRA HarperCollins in January 2020. After writing 20 books, novellas and online reads for giant Harlequin that sold over 1.65 million books worldwide, she quit to concentrate on historical fiction. Her first historical fiction, The Tide Watchers, was based on a true story. Lisa won the 2021 Adult, Published Section of the Children’s and Young Adult conference with her WWII historical fiction Ordinary Volunteers. The book’s based on the real life story of her neighbour’s grandparents, a Polish Resistance fighter who survived Auschwitz, Mauthausen and Gusen II concentration camps, and a German Red Cross nurse engaged to an SS officer. Three publishers asked her to submit the book after reading a partial. Her agent is Tara Wynne from Curtis Brown. For further information:

Kevan Lyon is a founding partner of Marsal Lyon Literary Agency. With over 25 years in the publishing business, including over 10 years as a literary agent and 17+ years on the wholesale, retail and distribution side of the business, Kevan brings an informed and unique perspective to her work with clients. Kevan handles women’s fiction, focusing on commercial women’s fiction, with an emphasis on historical fiction. Kevan works with her authors to help them realize their dreams of being published and to build a long term career as a writer. Kevan represents numerous NYT, USA Today and internationally bestselling authors including Kate Quinn, Natasha Lester, Stephanie Dray, Chanel Cleeton, Kaia Alderson, and many more. For further information:

Alison Stuart began her writing career half way up a tree in the school playground where she wrote her first (unpublished) historical romance. She writes historical romance for Harlequin MIRA, Escape Publishing and also publishes independently. She has twelve published novels as well as a number of shorter works. She also writes historical mysteries as A.M. Stuart and is published by Berkley Publishing (Penguin New York). For further information:

Christine Wells is the author of fourteen published novels, including THE WIFE’S TALE, THE TRAITOR’S GIRL, THE JULIET CODE, and her new release, SISTERS OF THE RESISTANCE. Writing in settings ranging from Regency and Georgian England to World War II England and France, Christine features strong women facing extraordinary circumstances throughout history. A former corporate lawyer, Christine lives with her family in Brisbane, Australia. For further information:

There will be a Q&A at the end of this session to enable the panellists to answer general questions about the topic. No individual pitch approaches will be taken.