Courage of Her Convictions: Tales of Quiet Rebellion 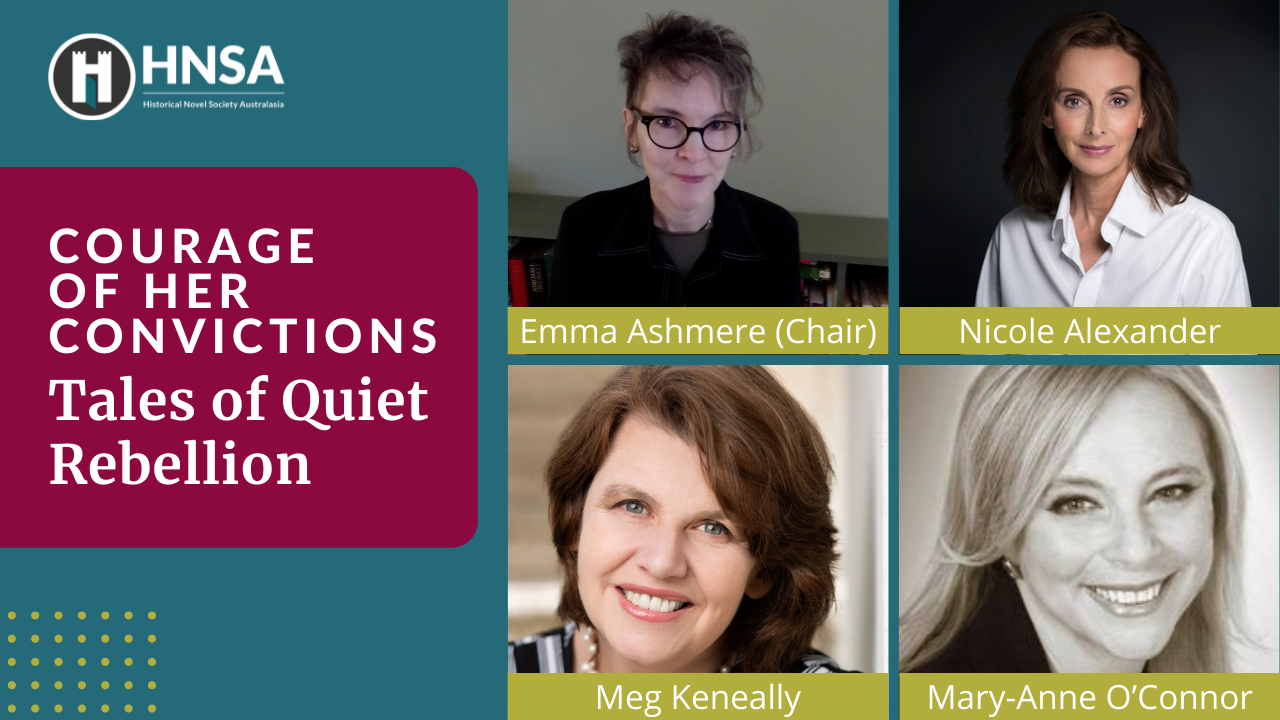 Emma Ashmere chats to Nicole Alexander, Meg Keneally and Mary-Anne O’Connor on the challenges of creating strong female protagonists within the constraints of an historical period who chafe against the roles society imposes on them, and break through the rules of conformity.

Emma Ashmere is the author of Dreams They Forgot and The Floating Garden, which was shortlisted for the Small Press Network Book of the Year 2016. Her writing has appeared in Meanjin, Overland, Age, Review of Australian Fiction, Griffith Review, the Commonwealth Writers magazine adda. She has a PhD in fiction and marginalised histories from La Trobe University, is a finalist in the Carmel Bird Digital Award 2021 and a recipient of Varuna Writers Space Residency. Emma lives on Bundjalung country in northern NSW. For further information:

Nicole Alexander’s novels, poetry, travel, creative writing and genealogy articles have been published in Australia, America, Singapore, New Zealand, Ukraine, Germany and Canada. She is the author of ten bestselling historical novels. Nicole’s debut novel, The Bark Cutters was shortlisted for an Australian Book Industry Award and she holds a Master of Letters in creative writing and literature. She is Chair of the 2021 ARA Historical Novel Prize. Her most recent work is The Cedar Tree. For further information:

Meg Keneally is the author of The Wreck and Fled. With Tom Keneally, she is co-author of the four-book Monsarrat Series of historical murder mysteries. With Leah Kaminsky she co-edited Animals Make Us Human. Her next historical novel, The Last Queen, will be out in 2022. For further information:

When she was twelve Mary Anne’s father Kevin Best left his established career in the stock-market to become one of Australia’s best-loved artists which inspired her to follow in his footsteps and pursue her own creative aspirations. A colourful marketing career followed, along with the completion of education/arts degree with specialities in literature, music and environment. During this time she also co-wrote two books with her father, A Brush with Light and Secrets of the Brush. Work then began on her first major novel, Gallipoli Street. This work gained critical acclaim and finished at #3 for debut novels in Australia in 2015. Since then she has released five more novels: Worth Fighting For in 2016, War Flower in 2017, In A Great Southern Land in 2019, Where Fortune Lies, in 2020 and Sisters of Freedom in 2021. Mary-Anne has drawn on her love of the Australian bush, her fascination with her own family history and her deep, abiding respect for the men and women who carried our nation through turbulent, formative times to produce these novels. Mary-Anne still lives in the Bushland Shire with her husband Anthony, their two sons, Jimmy and Jack and their very spoilt dog, Saxon. She is an avid supporter of Hornsby Ku-ring-gai Women’s Shelter. For further information: